In 1838 the partnership executed a trust disposition in favour of Peter Scott, a local banker, and Peter Clerk, a local writer. The business was then put under the management of the former brewery clerk, George Wilson.

The lease of the brewery, along with the brewing utensils, was offered for sale in 1838, and again in 1841, when it was referred to as the Auchterarder Brewery, and was being operated by Thomsons & Co. Robert Mailer, who later operated at the nearby Feus Brewery, was recorded as living at Ruthvenbank in 1841. 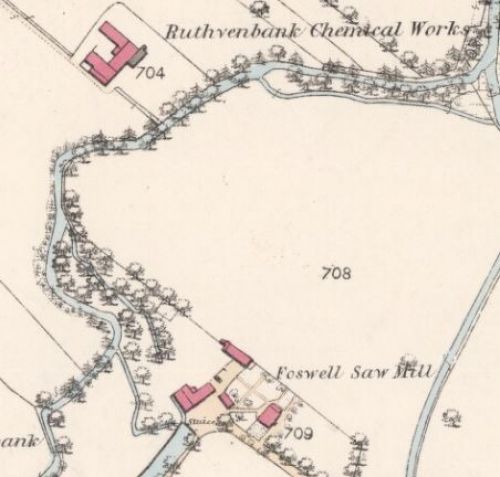 Map of 1860 showing the probable location of the Ruthvenbank Brewery
© National Library of Scotland, 2016

Sadly we do not have a picture of the Ruthvenbank Brewery. Please contact us if you have one!

The brewery was described as being "about 200 yards south of the great road from Perth to Glasgow", which most probably places it at the south end of the field shown in this view, which was the site of what was later the Ruthvenbank Chemical Works.