William Shiells constructed a new brewery and park at the west end of Haddington, south of Court Street, in about 1830. The complex, which cost over £3,000 to develop, was described as being "an extensive building three storeys high with suitable offices and a portion of land and garden attached" and as having "a brewhouse, maltings, kiln, mill, granaries, cellarage, and stables".

After William's death in 1847 the property passed to his son William Goodall Shiells who leased it in 1853 to James H. Inglis & Co, a partnership formed by James Henderson Inglis and James Ferguson of Edinburgh. When Ferguson died in 1854 the brewery was put up for sale.

However, there were no buyers and William's brother Ross stepped in to run the brewery from 1857. In 1860 the decision was made to sell the brewery for the initial upset price of £1,500. In 1861 it was acquired for the reduced price of £1,280 by George Young, a local smith, who sold off the equipment and leased the main building as a maltings to Peter Punton, thereby bringing  brewing to an end at Brewery Park after only some thirty years. 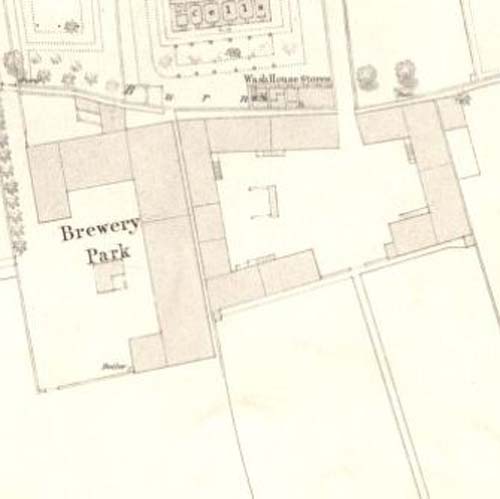 Map of 1853 showing the layout of Brewery Park
© National Library of Scotland, 2018

Sadly we do not have a picture of the Brewery Park. Please contact us if you have one!

The brewery has been demolished and the site is now occupied by part of an East Lothian Council building complex. Three later outbuildings still stand, converted to private housing.