Thomas Bernard was a son of Daniel Bernard, who was brewery clerk, and then manager, of the Leith Distillery off Bonnington Road. In 1841 Thomas was recorded as a brewer at the distillery, as was his brother James Alexander Bernard. Thomas was first listed as a brewer at 71 North Back Canongate in 1845, at premises which were later known as the Edinburgh Brewery and which had been previously occupied by Peter Wilson. By 1851 he was employing eight men at the brewery, and in the following year he went into partnership with his brother James, trading as Thomas and James Bernard.

We do not currently hold any images of items related to Thomas Bernard, and would welcome any information or images related to his business. 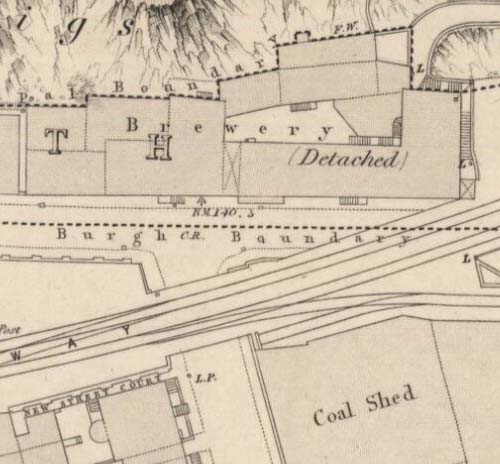 Map of 1852 showing the layout of the old Edinburgh Brewery.
© National Library of Scotland, 2017