The Crownpoint Brewery was established by Owen Lynch around 1868. After his death later that year the brewery was run by a board of trustees, who offered the business for sale in 1872.

It was then leased by the partnership of Gillespie, Gray & Co, who renamed it the Crown Brewery until their lease expired.

When Gillespie, Gray & Co moved to a new, purpose-built Crown Brewery in Slatefield Street, the brewery was offered for sale in 1882 under its original name with an upset price of £6,600.

It eventually came under the ownership of Crownpoint Brewery Ltd in 1898, which was wound up in 1904. 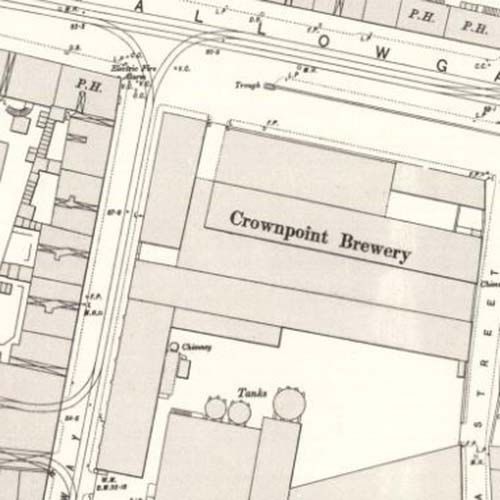 Map of 1892 showing the layout of the Crownpoint Brewery
© National Library of Scotland, 2015

Sadly we do not have a picture of the Crownpoint Brewery. Please contact us if you have one!

The site of the brewery now lies under a retail development.