The Dumbarton Brewery was in existence from the late 18th century and had come under the control of the Dumbarton Glass Works Company by 1798, which was at the time the largest glass manufacturer in Scotland.

Wood's map of 1818 shows the complex on land owned by Jacob Dickson, one of the partners of the company and, for a while, the Provost of Dumbarton.

It then passed into the hands of William Risk, and when he offered the brewery to let in 1852 it was described as consisting of a "brewhouse with mash tun capable of mashing fully six quarters, water and wort coppers, large water cistern, etc., tun rooms and ample cellarage, granary, malt barn and drying kiln, stable, hay loft … a good two storey house ... which being at present in flats has been occupied by the brewer and carter".

Unfortunately, much of the premises, along with several other shops in the High Street, were destroyed by fire later that year. It seems likely that William then redeveloped the site, as the layout is markedly different in a map of 1860.

Alexander  Gillespie operated from the brewery from about 1861, and eventually acquired it when the estate of James Blair Risk, William Risk's son, was put up for sale in 1880. It was eventually renamed the Crown Brewery, following the closure of the brewery of the same name in Glasgow. 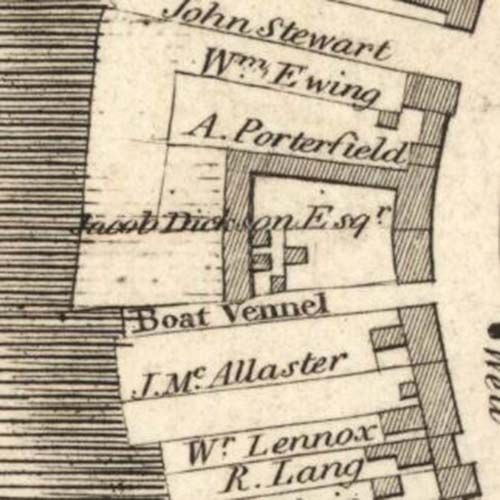 Map of 1818 showing the layout of the Dumbarton Brewery on land owned by Jacob Dickson
© National Library of Scotland, 2015

Sadly we do not have a picture of the Dumbarton Brewery. Please contact us if you have one!

The site of the former Dumbarton Brewery is now used for car parking.