The Haddington Brewery Co Ltd was established in 1896 to acquire the Sidegate Brewery from James Mackell Montgomery. The value of the business, including the property, stock-in-trade and goodwill was estimated at £7,750. The capital consisted of 1,000 £10 ordinary shares and £1,000 cumulative 5% £10 preference shares, of which 600 of each were issued in the first instance. The directors were: James Mackell Montgomery (who took £2,000 shares "to account of the price"); Clement J. Mackness, a solicitor from Dundee; Walter W. Romanel, of the local Railway Inn; George Richardson, of the local Blackbull Hotel; and D. Sanderson, a local spirit merchant.

In 1897 the capital was raised to £25,000 (1,250 ordinary and 1,250 preference shares). However, within two years the company had been put into liquidation, with the winding up being concluded in 1901. The company was then re-established by John Robertson, an Edinburgh solicitor, with capital of £20,000 (20,000 ordinary £1 shares). However, the underlying problems were not resolved and it was put into liquidation again in 1904 with the winding up being concluded the next year, bringing brewing at the Sidegate Brewery to an end.

The Sidegate Brewery was arranged around a courtyard and consisted of a brewery, malt kiln, granaries, cellars, steam engine house, stable, guano house, and garden, and has having a 12 quarter maltings. 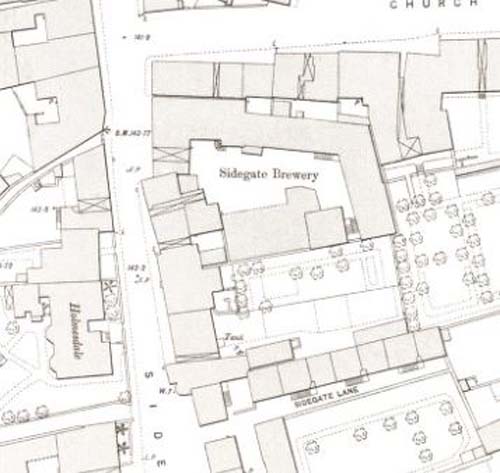